Re-dedication of the War Memorial Clock

The War Memorial Clock, which stood in the Hall at Woodfield and now stands in the Staff Room at the present site, has been refurbished (funded by the Association) and was handed back to the School as a gift to commemorate the new millennium by the President, Tony Kidd, on Wednesday, 4th July, 2001.

The President outlined the history of the clock and the Associaton's part in its original purchase and recent refurbishment to a gathering of Association members, School Governors and Staff.

Reverend Owain Bell, Vicar of Kidderminster, re-dedicated the clock, reminding the assembly of its original purpose and inviting them to think of the 46 young men, on the threshold of life, in whose memory it was originally dedicated. He said that in its additional role, to commemorate the new millennium, it represented a symbol of hope for the future as well as remembrance for the past.

The Headmaster, Alan Brooks, thanked the Association for the gift and said that the School would treasure the clock both for its value as an attractive timepiece and for what it represented.

Our photograph above shows the Association President, Tony Kidd, the Headmaster, Alan Brooks, and Reverend Owain Bell, Vicar of Kiddermister, shortly after the ceremony.

Further pictures of the clock and details of it and other School war memorial items follow.

Shortly after the First World War, members of the Old Carolians Association contributed to a fund to erect a War Memorial in honour of those Old Boys of the School who fell in that war. The memorial was intended to consist of:

a stained glass window with the names of the fallen recorded in the window or at the sides;
a board or plate containing a Roll of all those that served;
a chiming clock;
the endowment of an annual School prize called "The War Memorial Prize"; and
the balance of the cash subscribed to assist towards the education of the sons or immediate relatives of the Old Boys fallen in the war.

The stained glass window is still in the old School Hall, now that part of the Registry Office where civil marriages are officiated, with a tablet either side if it listing the names of those that fell. Sadly, as no objects with religious connotations are allowed to be displayed, the window, which contains a Christian cross, and the tablets are kept covered. 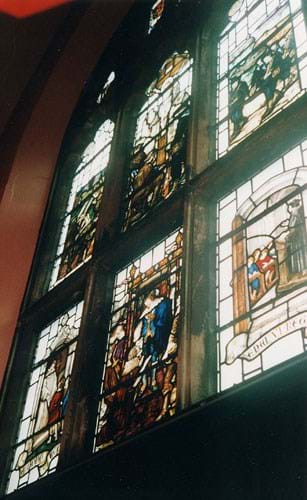 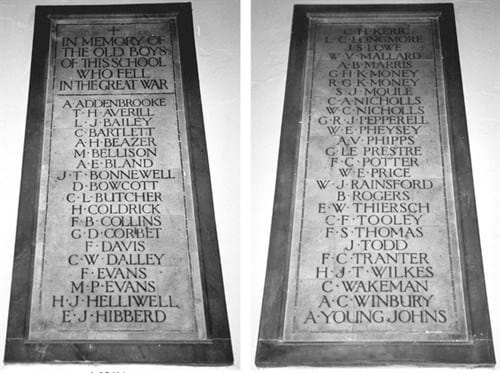 The Old Carolians Association still gives a prize which, according to the Notes distributed on Speech Day concerning the Endowed Prizes, was first donated in about 1920. We believe that this was originally donated as the proposed "War Memorial Prize", but was never called that. This year's prize was awarded to Richard Vernon..

The balance of the fund, originally intended to assist towards the education of the immediate relatives of the fallen Old Boys, was what has now become the Old Carolians Leaving Scholarship Fund. This Scholarship Fund is still used today to help School leavers, now girls as well as boys, who are going on to further education.

We believe that the board containing the Roll of all those that served in the Great War was never erected.

The clock was purchased, and although we know that the window was unveiled on 25th February 1922, the clock, which stood to the left of it, appears to have been presented to the School in 1919, as evidenced by the inscription that can still be seen on it:

The Latin inscription translates as "The hours of the day, the praises of God".

We believe the clock was made in Birmingham in about the 1870's.

Last year, an old boy of the School, Dr Bob Millward, who was researching local war memorials approached the Secretary of the Association, Martin Humphries, to see if he know of the whereabouts of the clock. The Secretary, a Governor of the School, knew of a clock that stood in the Staff Room but did not know if it was the clock in question. He examined it and found the inscription identifying it. Sadly it had not worked for many years, probably since its move from Woodfield to the present site, and possibly for some time before that. Some parts were missing, others had been clumsily modified and the chiming mechanism had been reassembled totally incorrectly.

The Secretary reported these facts to the Committee who agreed that the Association would fund the refurbishment of the clock as a millennium gift to the School and asked the Secretary to organise the repairs. At 9:48 a.m. on Friday 30th March 2001 the clock started ticking again. On 25th May the final adjustments were made to the chiming mechanism. The clock was again fully functional. 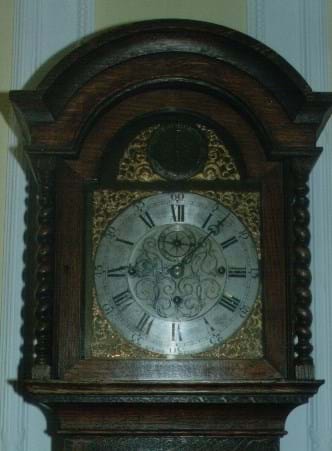 At 5:45 on 4th July, 2001, the clock was re-dedicated and handed back to the School in a short ceremony held in the Staff Room.