Around 90 members of the Old Carolians’ Association sat down to Dinner this year, with the catering again handled very professionally by Plyvine and with  the occasion chaired by our newly elected President Arthur Miller.  This may be the last time we will be called the Old Carolians as a very strong tide is moving in favour of our being renamed   The Carolians’ Association. This Dinner is the highlight of our year and again we were joined by many members of Kidderminster High School Old Girls’ Association.  This is a trend which is very much to be welcomed. 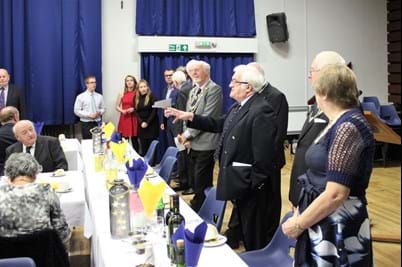 As with any large celebration, we need to mention those who put so much effort and time into making the event a success.  Prominent in the organisation of the Dinner were Peter Picken and Dave Laverty, Past Presidents of the Association, for their administration and for their lovely illuminating table decorations.  Then there are Colin Lloyd, Roger Perrin, David Slater, Mike Wilson and Norman Broadfield.   Norman’s presentation of historical documents and photographs of the school provided a continuous and fascinating screened showing throughout the evening.

Peter Picken said grace to get the meal underway and at the conclusion, Stephen Brownlow rose to give the first speech.  He said the year 2018 had been the best year for progress in the School’s recent history.  The School had been top in the Wyre Forest area and 6th in the Worcestershire Local Authority.  There had been approximately 100 trips, to Universities, for Duke of Edinburgh work, Residential visits to Paris, Cologne and the Leicester Space Centre.   In addition, several sports teams had been champions in Wyre Forest, in girls’ football, and rounders for example.  There had also been individual exceptional performances in Athletics, and Cycling.  Students had undertaken leadership roles in work for the disabled and had produced an excellent drama presentation of Beauty and the Beast.   He said the School was extremely fortunate in being able to call on the Old Carolian Trusts (King Charles 1 School Foundation, Roy Woodward Educational Foundation and the Harry Train Exhibition) which provided grants, to buy computers, carpets, sports equipment, furniture and to help to finance students going on to Universities, Colleges and Further Education.   Stephen mentioned that the old Honours Boards from Woodfield Hall, now sold to Developers, had been placed for safekeeping into the boiler room at the school.  Perhaps the most significant educational event of the year however, had been the creation of the Four Stones Multi Academy Trust, where King Charles 1 School had joined in partnership with Haybridge High School, Hagley.  This will probably take the school on to another education high and will create one of the most advanced educational partnerships in the West Midlands.  Stephen ended his speech by proposing a toast to the Old Carolians’ Association and to its new President Arthur Miller.

Arthur began by praising the hard work of teachers and students at the school. He had recently enjoyed the School’s Founders Day Service, revelling in the achievements described and in the active role of the pupils.  He commented that the School was fortunate to enjoy its foundation of financial assistance when so many British schools, in a different post code, are struggling.   From his residential French perspective, Arthur said that this story of financial problems is replicated across the Channel too.  Obviously, the wealthier a school is, the more you can offer in the curriculum and one major educational aim in Europe should be an effort for students to meet, to understand one another ,and to avoid conflict between citizens and countries.  He said he felt that the Old Carolians should embrace change too.  Perhaps a move to a new name of the Association was now appropriate, Society has moved on and we should too.  We have 580 members and the Association and all its members should be striving to double that number.  Arthur concluded his speech by proposing a toast to the School.   A rousing singing of God Save the Queen and Old Lang Syne brought a very successful Association Dinner to a close.